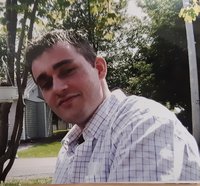 Of Ottawa, passed away peacefully with his family by his side at Ottawa Civic Hospital on Wednesday, July 3, 2019, in his 32nd year.

Donations in memory of Robert may be made to Narcotics Anonymous, Ottawa Innercity Ministries, or the Union City Church, Ottawa.

Condolences may be left for the family at www.lannin.ca