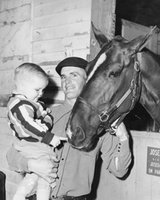 Curran, Ross Arthur Peacefully at the Perth and Smiths Falls District Hospital on Monday, September 14, 2020 at the age of 83. Beloved husband of the late Geraldine Curran. Loving father of Chuck (Karen), Ann, Doug (Joanne) and Pattie. Dearly missed by his grandchildren Chad, Kelsey, Mackenzie, Joe and Mattie. Predeceased by his parents William and Mary Curran, and his siblings Ken (Emma), Jack (Myrtle), Ernie (Shirley), Leonard (Isobelle), Lillian, and Pearl (Clarence). Sadly missed by his brother Neil (Eva). Ross “Cowboy” Curran Ross’s illustrious harness racing career began at the age of sixteen in Smiths Falls, Ontario; by the age of twenty he won his first driving title at Connaught Park. He went on to win many driving titles as well as being a leading driver at Mohawk, Greenwood, Garden City, Blue Bonnets, Richelieu Park and Rideau Carleton; competing against the likes of Hall of Famers Keith Waples, Bill Wellwood, Ron Feagan and Ronnie Waples. Ross was also known for his love of heading out to the local fairs to race a few. He was a fan favourite at Lombardy Fair and Perth Fair with many Curran family members making these annual events. A respected horseman, Ross ran a large and successful stable. His nickname “Cowboy” was given to him by Kenny Carmichael for his ability to handle horses that were considered unmanageable. Ross’s brief career (lasting less than 20 years) was cut short due to illness; however, his accomplishments include the 3rd leading driver in North America in 1972, as well as, the leading dash winner from 1964 to 1973 in Ontario, with an average winning percentage of .317 over a ten year period. In his 8686 career starts, Ross finished in the top 3 positions 49% of the time. In 1988, Ross was inducted to the Smiths Falls Sportsman Hall of Fame and in 2009 he and received an Ontario Harness Horse Association “Living Legend” Award. Ross’s family involvement included his brother top-driver, Neil Curran and continued on with Ross’s son, Chuck Curran, training multiple OSS Gold event winners; daughter, Ann Curran, Cam Fella award recipient in 2008, and youngest daughter, Pattie Curran, always there to support and cheer him on. Nephew, Rick Curran, a leading driver in the Ottawa Valley and Blake Curran, currently racing at Rideau Carleton. Friends may pay their respects at the Lannin Funeral Home on Friday, September 18, 2020 from 10:00am - 12:00pm. A graveside service will follow at Hillcrest Cemetery. As expressions of sympathy donations to the Heart & Stoke or Ontario Standardbred Adoption Society (www.osas.ca) would be greatly appreciated. Funeral arrangements have been entrusted to the Lannin Funeral Home. Online condolences available at www.lannin.ca