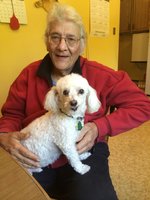 Dunn, “Jim” James Philip Passed away peacefully at Ottawa General Hospital on January 21, 2021 with family by his side. Jim was born on Valentine’s Day, February 14, 1944. He was the cherished son of his mother the late Jean Richardson and his stepfather the late Merv Richardson, and grandson to his devoted grandmother the late Lillian Crawford. Sadly missed by his step sisters Marilyn (Wayne) of Stirling, Ontario, Carol (Roger) of Bobcaygeon, Ontario and stepbrother Rob (Louise) of Delta, BC. Jim will be fondly remembered by many friends and neighbours, especially Adrian and Julie who assisted Jim on a frequent basis. He will also be remembered by many step nieces and nephews who listened intently to his stories of turtles and other wildlife. Jim’s dog Gus was the light of his life until Gus left him in June 2019. Jim was retired from Machabee Animal Food Ltd enjoying his daily visits with many local farmers. Jim was an avid model train collector and frequented the train shows for many years with his long time friend the late Jack Walker. The family would like to thank the friends, neighbours and coworkers who supported Jim through the years as his health deteriorated. Thanks also to the long time care of Dr. Brian Penny and Dr. James Conway and the care from the emergency team at Smith Falls Hospital in particular Dr. Michael Horsey who accompanied Jim to the Ottawa General Hospital. The compassionate care provided by the ICU unit and Dr. Holly Yim at the Ottawa General was appreciated. In keeping with Jim’s wishes he has been cremated and a private service will be held at a later date to celebrate his life. As an expression of sympathy donations can be made to the Lanark Animal Welfare Society in Smiths Falls. Arrangements have been entrusted to the Lannin Funeral Home, Smiths Falls, Ontario. Messages of condolence may be left for the family at www.lannin.ca