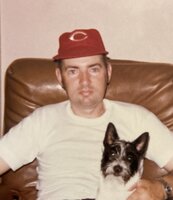 Carmichael, Donald (Don/Donnie) Wayne Passed away suddenly at home in Montague Township on December 17, 2021, at the age of 80. Loving father of, and sadly missed by, sons: Ronald Carmichael (Sheena Edmunds), Scott Carmichael (Ailen Navarez) and Tom Carmichael (Gloria Huneault); and grandchildren Sarah (Maloney), Tamara Carmichael, Tiffany Carmichael, Brittany Carmichael and Riley Carmichael; Ivan Navarez, Simon Carmichael and Matthew Carmichael; and Spencer Carmichael and Jaida Carmichael. Don is also survived by his ex-wife, Mary (Rick Lomax). Also sadly missed by his faithful Sheltie companion, MacGregor. Don was predeceased by his parents, Bernice (née Marlin) and James Carmichael, and brothers Roy and James Carmichael. As an employee of CP Rail in Smiths Falls for four decades, Don followed in the footsteps of both his father and grandfather, James MacGregor Carmichael, who emigrated to Canada around the turn of the 20th century. In his youth, Don was a track and field athlete in high school, and remained an avid sports fan throughout his life, enjoying the exploits of his beloved Cincinnati Reds – particularly their World Series championships in 1975, 1976 and 1990 – as well as those of the New York Islanders, New Jersey Devils of the NHL and the CFL’s Edmonton Eskimos. As per Don’s wishes, cremation arrangements have been entrusted to the Lannin Funeral Home, with interment at Maple Vale Cemetery to follow in the spring. Online condolences available at www.lannin.ca